chocolate zucchini bread and being a locavore

There is all kinds of hype around the whole organic movement. Is it something to buy into, or is it just another marketing catchword like “gluten-free” that doesn’t necessarily hold any merit in terms of nutrient density? Well, my goal with this post is to help clarify, answer your questions, and hopefully, help you understand why I buy almost exclusively organic despite the higher prices. I am going to start by discussing a study that claimed to “prove” that organic produce is no healthier than conventional. There is no better way to prove an argument, after all, than by stripping some of the validity from the opposing side to start. I would love to do this on my own, but I don’t know if I could do as eloquent a job as Mark Sisson in THIS article from his blog, Mark’s Daily Apple.  Here is the bit that stands out most to me:

“If you take the Stanford meta-analysis at its word, you’ll conclude that “published literature lacks strong evidence that organic foods are significantly more nutritious than conventional foods.” Yet critics of the study argue that mistakes were made and that certain nutrients were overlooked, or undervalued, by the authors. One such critic, Dr. Kirsten Brandt, an agricultural scientist who specializes in how growing conditions impact the nutritional density and composition of produce, conducted a similar meta-analysis of the literature that covered much of the same literature as the Stanford study and came to a slightly different conclusion.

Brandt’s review covered more nutrients than the Stanford review. She found it puzzling that the Stanford researchers chose to “include [nutrients] where the difference was smallest to begin with” while omitting others “that were just as well-described in the papers they included.” They also wrote that there was no difference in total flavanol content, which directly contradicted Brandt’s findings, but a closer look showed that they’d merely misspelled flavonol – an honest mistake, albeit one that cloaked a major benefit of organic produce.”

Interesting to say the least…. more on this as I go on.

Let’s talk more about the positives here. Why do I spend the extra cash and energy to buy organic (and local) as often as I possibly can?

The first point to make here is that the mineral content of produce depends directly on the mineral content of the soil in which it was grown. The longer organic soil is used, the more minerals tend to be found in the produce grown in it. The more and more the soil is worked on, tended to, and used for the TRUE purpose earth was intended for, the more nutrient-dense the produce. Makes you wonder if some of the studies comparing organic vs. conventional produce tend towards fresh organic soil rather than the mature, nutrient-rich soil that has been loved and cared for as it should (rather than sprayed, over-picked, etc.) right?

Then, there’s THIS study comparing organic strawberries with their conventional counterpart, which showed that the brighter, tastier, smaller, denser organic fruit has increased levels of phenolic compounds and other antioxidants, along with more Vitamin C.

Let’s be real, all this talk lately of “well, a calorie is just a calorie” and “all that matters is calories in and calories out” is a whole bunch of baloney. Cravings aren’t merely a matter of lack of self control or giving into “cheating”; they’re a matter of your body missing ESSENTIAL nutrients and begging for more food in an effort to get more of what is necessary to thrive. I can assure you that eating a bowl of conventionally grown (or even worse genetically modified) strawberries won’t leave you feeling nearly as satisfied as half the amount of organically grown, nutrient-dense locally farmed strawberries… ok, now my mouth is watering.

While the aforementioned study talked a lot about how there is no nutrient difference between organic and non-organic, there was very little (and by little, I mean pretty much zero) mention of the toxins that are sprayed all over our conventionally grown produce every day. I am going to kick this section off with a quote from a recent article from Chris Kresser:

“According to the authors [of the study], organic foods are no more nutritious than conventional foods. But, ahem, eating organic foods may reduce exposure to pesticide residues and antibiotic-resistant bacteria. Somehow that last bit just slid right by in most of the media coverage of the study. The headlines were all about how organic is no better than conventional in terms of nutrient content, but few articles analyzed the significance of the increased exposure to pesticide and antibiotic resistance bacteria. No mention of the fact that pesticides, herbicides and other harmful chemicals that have been shown to cause health problems – especially in vulnerable populations like children. No mention of the 2010 report issued by a panel of scientists convened to study the effects of environmental toxins on cancer urging Americans to eat organic produce grown without pesticides, fertilizers or other chemicals, because the U.S. government has grossly underestimated the number of cancers caused by environmental toxins. No mention of the especially high risk these chemicals present to unborn children, such as lifelong endocrine disruption, hormone imbalances and other problems.”

HERE is another review explaining how a recent report says that the government has been grossly underestimating the effect of environmental toxins on our cancer risk. Guess what one of the biggest culprits of the report was… yep chemicals used in farming.

I don’t know about you, but I am not willing to make a sacrifice like this one to save a couple bucks on produce. Imagine the implications later on. Hospital bills are far more expensive than organic broccoli.

A final VERY important point that the study (and most people in general) fail to mention or think about is the amount of time produce spends out of the ground before it is consumed and the impact this has on the nutrient density. THIS study found that spinach lost 47% of its folate after only 8 days.

When we take it a step further, think about the environmental footprint made to ship tons of produce internationally – the packaging, the trucks, the ships, the cars…

What saddens me about the whole food industry these days is that people have completely lost touch with where this stuff comes from. Kids (and some adults, apparently) think that oranges grow in produce isles and that chickens actually have breasts the size of melons. It’s time we get back in touch with what food is supposed to taste like, the nutrients it is supposed to provide, and most importantly, where it really comes from.

The reality is that nutrient loss happens over time whether produce is organic or not, so buy locally, choose organic when you can, and get to know your local farmers! Check out THIS link to see where you can buy locally in your area.

Alright, recipe time! We bought some beautiful organic zucchinis from our local Farmer’s Market, and when the hubs got a sweet tooth, I knew exactly what to make. Typically, I like my produce fresh, but occasionally, it’s fun to make some delicious baked goods to share, and when you can get some veggies in there, it’s a win – win! So here it is… 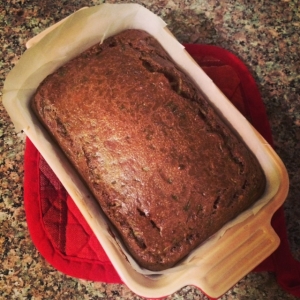 OPTIONAL SWAPS: I did this a second time around and swapped Nikki’s Coconut Butter (Vanilla Cake Batter) for the Love Bean and Organic Sun Butter for the Cashew Butter, and it was also delicious! (double the maple syrup because if you make these swaps).

Happy Wednesday folks! What are your thoughts on buying organic and local? Where is your go-to spot to buy fresh produce? Comment below!

This site uses Akismet to reduce spam. Learn how your comment data is processed.